It’s more then classical Muscle car, much more. Created during “golden age” of design in 1992 by Tom Gale, who is also notable for Plymouth Prowler.

The centerpiece of the car was its engine. Lamborghini, then owned by Chrysler Corporation, designed the V10 for the Viper by recasting the block and heads in an aluminum alloy, and was based on the Chrysler LA V8 engine. A major contributor to the Viper since the beginning was Dick Winkles, the chief power engineer, who had spent time in Italy.

The first prototype was tested in January 1989.I was in love in this car since i first time saw it Gran Turismo 2 on Laguna Sega raceway in Licence test (actually it was second gen of Viper). But prototype, as it used to be, even more geaorgeous and speedy then production model.

It debuted in 1991 with two pre-production models as the pace car for the Indianapolis 500 when Dodge was forced to substitute it in place of the Japanese-built Dodge Stealth (based on 3000GT) because of complaints from the United Auto Workers, and went on sale in January 1992 as the RT/10 Roadster (or Phase 1 SR)

323kg huge 8 Liters V10 engine produced 400 hp at 4600 rpm and 465 630 Nm at 3600 rpm. The body was a tubular steel frame with resin transfer molding (RTM) fiberglass panels. Some small bits of the suspension, (tie-rod ends and parts of the front wheel hubs) following the manufacturer’s “engine first” mantra, were sourced from the Dodge Dakota pickup.

Body: The car was spartan, although it featured inflatable lumbar support and adjustable seats. Along with the absence of exterior door handles, the vehicle lacked side windows and a roof. Although a soft top cover was available, it was designed primarily for indoor vehicle storage. Side curtains of fabric and clear plastic operated by zippers could be inserted into the door and hand-bolted when needed. All of these decisions were made to reduce weight. Side-pipes are also a pice of art, but it’s a fact that they were too loud and replaced in 2nd genaration of Viper.

The Viper lacked all modern driver aids such as traction controlor anti-lock brakes. So this is the real one car for real drivers. 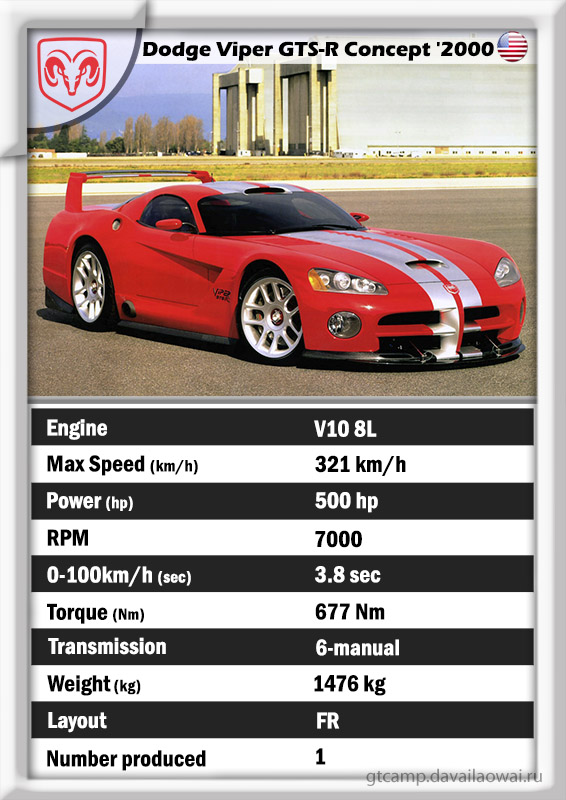